Bengaluru - Mysore - Bengaluru on bicycle in a single day 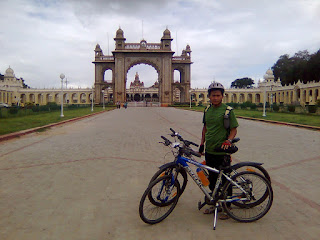 It was a team of crazy BBC. I was one of the newest entrant to the group, who started the first ride as a part of the group in the month end of April 2010 to Nandi Hill. I did manage to reach the peak and but failed to reach home by about 10 to 15 Kms and had to catch an auto. Well, I managed it the next time very comfortably, that in spite of pretty bad head wind on return... that was in July end where about 150 people rode to the same destination at the same time.

Though I had done three century rides by this time, I wanted to try a tripple century in a single day. Since I myself was not sure, I thought I would go to some popular place where return would get other options if I break down on the way.... chose Mysore... pestered big guys in BBC like Yogesh to initiate one for Mysore.

August 28th was planned. I enrolled for the 300 Km in a single day category as there were various other categories. I had a bus ticket on that night to Coimbatore at 23:00. So, I had to be home by 10pm at the latest. Thankfully other big guys in BBC like Siddu and ShreeHarsha were also planning to do 300 in a single day and they did most of the planning to keep the time.

I started at 0330 in the morning. Going was easy as it was downslope. I reached Kanakapura in no time, hardly before morning, it must have been about 60 Km... in less than 2 and a half hours. We had breakfast, we were about 7 people in the same place for either coffee or idli. From there, I has behind most other guys. I wanted to go at my own pace (do I have a choice? ;)) It was getting tougher and tougher towards Mysore as the slope increased and a little bit of headwind.

Managed to reach Mysore palace by around 12:30. Took some snaps. Three of us were there at that time. Four already headed back to Bangalore. Siddu had his rear rim dented and so decided to go back by bus after his Chamundishwari ride. I too decided to head back to Bangalore... alone as the other two guys decided to take Airavat bus. After riding about 15 Km, I thought I should rather take lunch else would miss my lunch. Spent too much time in the hotel for the lunch. Time to do some serious planning to reach home by 22:00 hrs. I also knew that the terrain from Rajarajeshwari Nagar towards Outer Ring road and towards JP Nagar are terrific ups and downs and I would take some energy there. So, I planned in such a way that last 60 Km should have at least 5 hours. To achieve that I had to average above 20Kmph for the first 85 Km. Well, I managed easily as it was good down slopes. Stopped here and there for water, tender coconut and snacks. Before dark, I started seeing all the familiar places like Wonderla, Kamath hotel, etc. I was more charged now seeing the destination coming sooner. But the traffic became messier and messier. Road was muddy and wet. Finally, I hit outer ring road by around 20:00. As I expected, outer ring road literally killed my knees. Stopped for dinner along the outer ring road. I had a lot of oil-fried baji and bonda stuff and a vegetable fried rice. Then headed for home. I reached home a little past 21:30 hours. So, I have done solid 18 hours of riding including breaks. I had problem in my cyclo-computer in Kanakapura and I had to reset everything. But Mysore to Banglore showed 145 (till home near Dairy Circle), in 8:12:00 (stopped the clock during lunch alone) in an average of 18.x Kmph.

So, I managed to catch my night bus to Coimbatore comfortably and drive back my car from Coimbatore to Bangalore along with family the next day.

Popular posts from this blog

May 18, 2016
Trans Am Bike Race is a race of about 7000 km with various kinds of terrain and landscape, temperature ranging from 0 degree Celsius to 42 degree, which can happen on the same day, altitudes from sea level to 11500 feet, with total gain of about 165,000 at a very conservative calculation. There are bad roads, rough roads, smooth roads, bear infested roads, thick forests, totally dry places. It takes through mostly country roads and there are places where supplies are 100 miles apart. Writing about every detail of the experience for me alone will sound like J.K. Rowling's novel, leave alone about compiling stories that I got to hear from other riders. Here, I will try to give a gist of the race while I focus mostly on my journey, how I survived the distance in spite of a horrible health condition, that happened in a bad timing, and in spite of my lack of adaptability to a food habit that is poles apart from my regular eating routine. I'm not a good writer who can mak
15 comments
Read more

April 01, 2016
This is titled The Last Ride just to emphasize that I'm stopping any bike race or any long touring rides after this ride, which is going to be a really long one. Brief History of My Cycling Ever since I started cycling in 2010, I had always done a big ride every year. In 2010, it was Mysore and back. It was big then, with my MTB Trek 4300. Then came brevet which made a distance like 300 km look like a newbie ride. I bought a hybrid bike Merida Crossway 10V in November 2010. I had no plans to own a road bike, but I still rented one for the 400 km brevet just to get a feel of it. Just after the 400 km brevet, decathlon offered BTwin Sport 1 for just 15000 rupees, an offer so tempting that I got it on the first day at the closing hour of the shop. All these while, wife supported me very well and never hesitated whenever I wanted to buy a bike. I raced almost every BBCh race in 2011, 2012 and 2013. And then I also bought an MTB KHS Sixfifty 603 in 2014 though I could hardly race
5 comments
Read more

April 18, 2011
First of all, a big "thank you" to the Bangalore Brevet team. They have made me super randonneur . After finishing the 200 Km in January, 300 Km in February, 400 Km in March on pedal, I was skeptical of the 600 Km in April - partly because of the distance and partly because of the heat that peaks around this time in Tamil Nadu. I had not done any special training for all my previous rides. Nevertheless, I had lately kept myself fit in some or other way - be it the small distance of cycling to office everyday or tennis on the weekends whenever possible or running around the lake in Lalbagh botanical garden. I wish I was still going to roller skating classes or the football matches that my office colleagues play every weekend. Or I wish it was the Bangalore Ultra marathon season. Nothing is happening. Only 10 more days to go - countdown to the 15th of April - Bangalore Brevets 600 Km . I need to work up a bit. My best bet was run - run around the Lalbagh lake. Usually 45 m
9 comments
Read more